According to report, Google Chrome users are currently facing disappearance of Google Chrome bookmark problem regarding browser history and bookmarks. They can’t access their Chrome history and bookmarks. Some of its users are complaining about the issue on various online platforms and even reporting to Chrome support teams. Suppose that when you open your computer and Fire up Google Chrome, suddenly you noticed that bookmark bar is completely empty. As you have sure that this is happening without your knowledge, what will be the next steps you take? On other, several Chrome users have actually faced this problem. Let’s take have a look at one user’s report on the matter.

Opened chrome today and went to click on one of my bookmarks. Before I could, all but 2 of them disappeared… Have not signed on to any other computers or devices recently (several weeks or months). Searched for backups and all trouble shooting I could find online to no avail. Any ideas why this might of happened? Or how to get them back? Lost 50 plus that I use on a regular basis and have built up over many years. Using windows 10 and latest version of Chrome.

Thank you but I understand how synching works. The issue was that after a Chrome update today, all my bookmarks were erased, I was logged out of my accounts and all the cookies gone. And because I do not synch my profile everything is gone, gone. 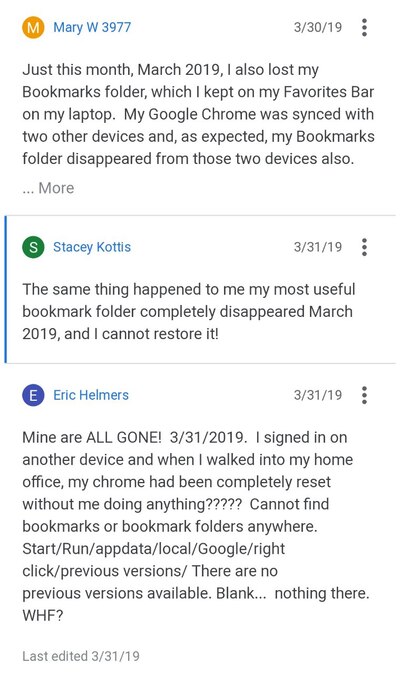 Disappearance of Google Chrome bookmarks: Start from Mid-March to Present

After deep research by Techsmagic, we are seeing that automatic deletion of bookmarks issue is happening from mid-March to the present. There many Google Chrome’s users who have shared their thought on Google official online forum and other official online platform as well.  Google Chrome bookmarks deleted automatically with the release of V73 and V74 update of stable channel of Google Chrome. Let’s take have look at some reports of affected users.

I have reviewed prior questions regarding similar issues. None are helpful. My folder disappeared for no reason. I did not install an update. I did not delete it. All of a sudden, it was gone. I cannot find the folder in Bookmark manager. My other bookmarks are still available. Only one folder (my most used) disappeared. How can I restore this folder?

I also lost all my Chrome history and bookmarks without any sign of any updates done on my Windows 10 Laptop. There is no files for Chrome in the User Application Data directory so no recovery possible from that end. Are these files stored somewhere on a Google server? Can they be recovered?

I find it appalling that there is no response, explanation or apology by the Chrome support teams.

Now, Google Chrome’s users are searching for the solution to fix disappearance of Google Chrome bookmarks issue. They are finding Bookmarks.bak file or use Google Takeout to dump last proper synced bookmarks using this tools. However, we have researched the recent most entries couldn’t be recovered. It is aspect that Google somehow mangled the syncing part of the bookmarking storage. 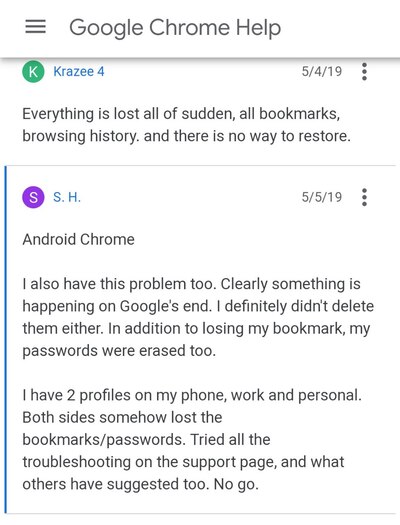 Developer Team is working toward resolving the issue

We’ve received reports of bookmarks getting duplicated or empty titles being padded with whitespaces. In order to investigate and rule out regressions in ongoing launches, let’s introduce some dedicated UMA.

The new code is introduced behind a feature toggle (enabled by default).

Hope disappearance of Google Chrome bookmark issue will be fixing soon as developer team said. We are researching on the matter very deeply and we will defiantly post an update, if it will come in future. For any suggestions or queries, please write on comment box given below.

You may also read: How to fix could not load plugin chrome Error on Windows 10