Modern Warfare needs no introduction this game is one of the blockbuster games and its craze among the players cannot be described with words. Thought the game is not flawless and till now so many issues and errors have been reported while playing or launching the game. But still the fan following of this game has not decreased which obviously reflects the victory of the developers.

Well here in this blog we are going to one of the repeatedly reported errors named Dev Error 1202 in Call of Duty Modern Warfare. If you are also struggling with the same keep scrolling the blog till the end.

Description of the Error!

And if we talk about the causes of this error then there are several factors that are responsible for throwing this issue such as outdated Graphics driver of the system, outdated installation of the Modern Warfare Game, corrupted installation of MW Game and incompatible DirectX Version of the PC.

Several users have claimed that launching the Modern Warfare Game in DirectX 11 Mode resolved their issue. So you can also give a try to this method.

Step 2: Under the right pane of the resulting window and tick the checkbox of Additional Command Line Arguments> Now type in the following in the box shown: 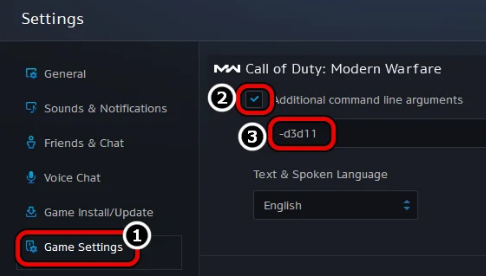 You are likely to face the above mention error if you are running an outdated game version. As the outdated version of the game block the execution of the game modules. So it is imperative to update the game. 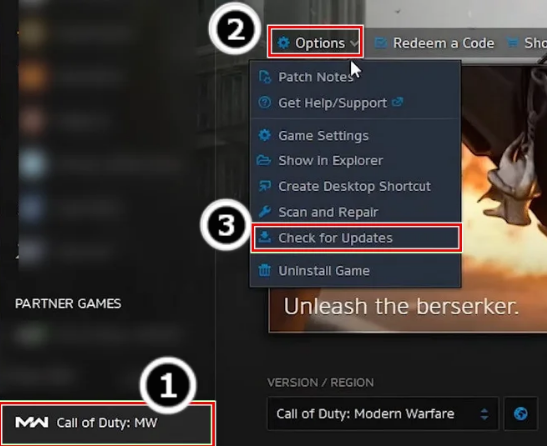 Step 2: If a game update is available you need to download and install the update> once done, relaunch the game’s launcher and check if the issue still persists.

Method 3: Host the Game as the Free Player

Sometimes hosting the game as a free player may clear the bug, so in order to proceed with the methods follow the below mention instructions:

Step 1: If there is a free player in your teammates ask him to send you the invite and host the game> After that join the game through invite and check if the issue resolved or not

Step 2: If there’s no free player available then log out of the Battle.net launcher and tap on Create a Free Blizzard Account

Step 3: Now follow the prompts on the screen to finish the process of creating a new free account and then use that free account to play the game

If you are still struggling with Dev Error 1202 in Call of Duty Modern Warfare it is suggested to downgrade the system’s Graphics Driver.

Step 1: First of all Right-Click Windows Start Menu Icon and open Device Manager> Then expand the Display Adapters tab by double clicking it and then right-click on your graphics card

Step 2: Select Properties and in the Properties Window go to the Driver tab> then click on the Roll Back Driver button (Note: if the button is greyed out, follow from the below mention step) and then confirm to roll back the graphics driver

Step 3: Once done then Restart your system and after restarting launch the Modern Warfare game to check> If not or the Roll Back button was greyed out on the above mention step, launch a web browser and steer to the OEM website

Step 4: Now Download an older driver from the website as per your system/card specs > Right-Click on your graphics driver in the Display Adapters tab of the Device Manager & select Uninstall Device

Step 5: Now checkmark the option of Attempt to Remove the Driver of This Device and click on Uninstall> Once done then restart your system and upon restart let the Windows install a generic graphics driver and launch the game

Step 6: If that didn’t works for you launch the older driver (downloaded earlier) as an administrator and then follow the prompts on the screen to finish the installation process

Step 7: After that Restart your PC and upon Restart check if the issue resolved or not> if you are still struggling with the same you need to try all the available older drivers on the OEM website one by one till the issue gets resolved.

You can also uninstall and reinstall the game because it is quite possible that the game files are corrupted and reinstalling the game will remove all the glitches from the file.

Step 2: You must now click on the Options to reveal a dropdown menu

Step 3: After that you need to click on Uninstall Game> and then wait for the un-installation process to finish

If none of the above mentioned manual methods works for you then it is strongly recommended to update your driver by using an automatic driver tool. This tool will not only update your drivers to the latest version but will also fulfill all the driver related requirements of your PC.

That’s all about Dev Error 1202 in Call of Duty Modern Warfare. We assume you liked the blog. Thanks for Reading.