How to fix Lutris not showing Epic Games [Guide on Lutris can’t connect to Epic Games, how to install epic games on Lutris ]

Here in this blog we will discuss about some of the most frequently reported queries regarding Lutris. So without any further delay let’s get started with the discussion.

Lutris not showing Epic Games what to do

If Lutris is not showing Epic Games then we suggest you to install Epic Store games with Lutris. To do the same follow the below mention guidelines:

Note that when you go to install a game through Lutris, you will be prompted to install Epic Games Store and Ubisoft Connect. But you don’t need to do this every time, it’s just creating a Wine install that will launch the EGS each time you ask Lutris to install a game. 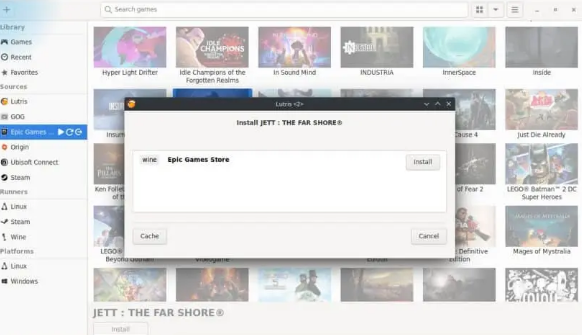 Step 2: Then follow the instructions until it starts downloading> leave the EGS open, you will need it to load the game.

Step 3: Once you are done with downloading, you will be able to play

When you are ready to start playing again, you will need to load up the EGS each time.

You may also read: How to fix Lutris not working on Steam Deck[Guide to use Lutris with Steam, Lutris Steam Deck controller not working] Solved

How to install Epic Games on Lutris?

In order to install Epic Games store on your Linux system, ensure that you have Lutris installed with its pre-requisites Wine and Python 3. So first of all install Wine on Ubuntu or whichever Linux are using and then download Lutris from its website.

If you are unable to connect Epic Games Store on Lutris then follow the below mention guidelines:

Step 1: Firstly launch Lutris and then search for Epic Games store as a source on the left side of the Window 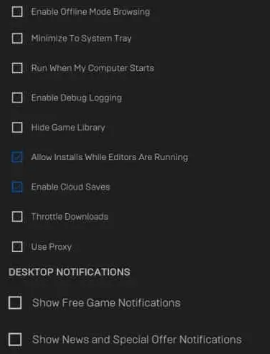 Once you load up the EGS for the first time and start your first install, ensure to click your account icon in the corner.

Now close Settings and then navigate and disable the following:

#. Minimize to the System Tray

#. Run when my PC starts

It will free up resources while you are in the desktop mode, but also stops he EGS notifications from tanking your performance at any given time.

How to install Epic Store Games with Heroic?

Firstly click the game you need to install and then choose a location & let Heroic do its thing. Once done, you can either play in desktop mode or choose to move over to add games to your Steam Deck’s game mode.

Most of the Heroic installs for larger games like Horizon: Zero Dawn has failed once finished. We also couldn’t get GTAV to install either.

From the desktop mode, you will need to add the games as non Steam applications in your Steam library. To do the same, launch the Steam app, go to your Library and in the bottom corner, there should be a plus button.

Now press this ad it will show a Window asking you to choose what apps you want to install. Let’s use an installation of JETT (EGS) and Pid (GOG). For instance, installed via Lutris and Heroic>under the Window pop-up, we want to head into where Lutris and Wine have placed our files. For us it was: 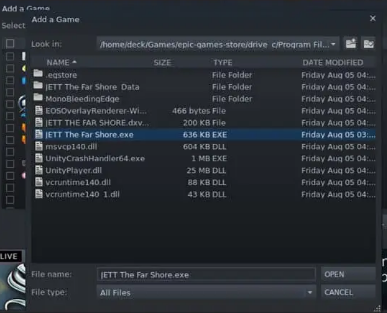 We also had to change the drop down menu named “File Type” from .desktop to All Files. It will reveal the .exe and the rest of the files. We just want to select the .exe which is the game itself.

That’s all about Lutris not showing Epic Games, we really hope you liked the blog. Thanks for Reading.

Where can i see my favorite clothes on Roblox on Windows 10/11, Android, iOS [Guide]

How to fix Roblox Redeem Card not working? [Guide on Roblox gift card error try again later and other queries]