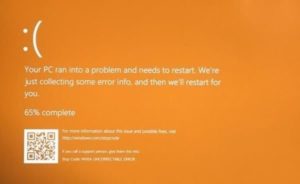 This issue can be occur when the clock speed can be changed, as  a result, your CPU or GPU may become unbalanced so try to lower it down and check if it stops the Win 10 Orange Screen of Death

If you get Orange Screen of Death Windows 10 issues, it’s because of incorrect address allocated to the driver. It can also indicate that a kernel-mode driver attempted to access page able memory at a process IRQL that was too high.

When updating the graphics driver does help, it is best to roll back the system to a point where it was working well. Boot into Advanced Repair mode, and I would suggest choosing a restore point which is maybe a week old. Make sure to back up the data on the desktop as it will be lost. Run Automatic Startup Repair and see if that helps.

Did you install software and then faced Win 10 Orange screen of Death problem? I have heard reports of much software which had caused this issue. I would suggest you check the recently introduced software list, and figure out if you had installed anything. If yes, uninstall and check if you still have the issue.

Whenever Win 10 Orange screen of Death on boot up and you’ve encrypted your OS using Bitlocker or other encryption tool, type your Bitlocker password, and hit Enter.

If Duet Display is installed on your computer, simply uninstall it. Ddkmd.sys, a component of Duet Display, is known to cause system crashes on Windows.

If you’ve encountered the Orange Screen of Death Windows 10 issues while playing your favourite games, set your game configuration file settings to default. Gamers confirmed that some graphics tweaks occasionally cause OSoD issues.

I hope all the above mentioned instruction will help to prevent or fix Orange Screen of Death Windows 10 issue. If you have other troubleshoots methods or steps please share with me in the comment section box.

Read Also: How to solve Function Keys Not Working on Windows 10 issue

How to fix The SysMain service terminated with the following error: The parameter is incorrect

How to fix The RstMwService service terminated with the following error: %%2684420176

How to fix Sling TV app not working on FireStick [Solved]

How to fix DIRECTV not working on FireStick [Help]