According to report, Xiaomi (Chinese Smartphone Manufacturer) has released its Redmi Note 7 and Redmi Note 7 Pro phones this year in India. As per company shared the report about Redmi Note 7,  two millions unit of the Smartphone has sold in around one month after launch which achieve similar benchmark in next month i.e., in second month again.

The company is giving full credit to its huge fan base in India behind grand success of Note 7 devices in terms of sales.. Redmi India says that fans/users of India is main reason this achievement in terms of sales.  Now, the company has released the Xiaomi Redmi Note 7 MIUI 10.3.5.0 update last month. Let’s take have a look at this firmware update.

Report says, MIUI 10.3.5.0 update has released for Redmi Note 7 users in Europe which is now live with major security patches. On other hand, we are also seeing that this firmware update has not roll out for Note 7 devices in India. For those who are not aware, Xiaomi has launched Redmi Note 7 in 2019 as mid-range phone that is powered by Qualcomm Snapdragon 660 processor. It has Android 9.0 Pie support with 48MP of camera in budget. Now comes to matter, some user from India have enquired on Mi official site and said that why MIUI 10.3.5.0 update not roll out for Redmi Note 7 devices in India. Let’s take have a look at some reports.

Like Battery Drain issue, pubg notch issue and Many More

The problem Is The Update Is Available In Global

So Tell Us Why It Is Late In India

Tell us Why It Is Late Or

No stable update 10.3 for indian Note 7 as well as no beta rom available as of now…this is bad 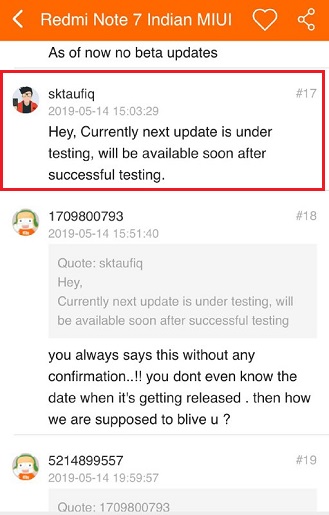 Since, Xiaomi has release MIUI 10.3.5.0 Firmware update for Note 7 devices which brought along with major security patch including March security patch, new AI camera modes and floating Window during incoming calls during games as well come bug fixes. This update is basically based on complains of users who was facing bug on their Note 7 Phones.

Interestingly, one of team member from Mi community has actively responding to the users’ queries and informing them the update is currently under internal testing. It will be available soon. But, there is no ETA as to how long will it take for the update to make it to Redmi Note 7 series in India. Apart from that, the company has acknowledged the battery drain issue with Note 7 Phone, PUBG not working in full screen as well as network problem as well. Let’s take have a look are device team member’s statement regarding full screen support on PUBG issue and network issue.

Full screen support will be available in upcoming updates

On other hand, developer said about battery drainage of Redmi Note 7 devices that they are currently working to resolving and it will be available in next update. We are seeing that a lot of Indian users are waiting for Xiaomi Redmi Note 7 MIUI 10.3.5.0 update India roll out which carry promises to fixes with update.

Xiaomi Redmi Note 7 MIUI 10.3.5.0 update neither released nor will be released for Indian users

According to report, Xiaomi’s Firmware updater signifies that this new update will never released for Indian variants of Redmi Note 7 phones. As per company claimed, Indian variants have been getting updates form the 10.2x branch which the next update will likely also be from the same branch. Since, it is equivalent to Xiaomi Redmi Note 7 MIUI 10.3.5.0 update. We are researching on the matter Xiaomi Redmi Note 7 MIUI 10.3.5.0 update India roll out deeply and we will defiantly post an update if it will come in future. For any suggestions or queries, please write on comment box given below.

You may also read: [Comparison] Samsung Galaxy A70 Vs Galaxy A50 Vs Redmi Note 7 Pro