Sony have been absent from the smartphone hullaballoo in past few years especially in the flagship segment. The innovative Xperia flagship design got faded in these years and company had not made any effort to come out of its self-design and same standard specification in its smartphones. But this year, the company has a lot of hope from its new flagship Sony Xperia 1 which it showcased in the MCW. I am sure, you will be curious to know what Sony Xperia 1 review has to offer.

Well, Xperia 1 is the new serious of flagship phones from the company. On its first look, it really looked different with its tall design. If you remember, the last flagship from Sony was Xperia Z3. There is no continuity in the name and thus it seem like Sony is trying to start the flagship smartphone dominancy from fresh.

Talking about the Sony Xperia 1 specification, it has the world first 4K OLED HDR display. Earlier, Sony did have their 4k display smartphones in their XZ premium segment but it has a LCD screen. The 4K OLED HDR display is something that we have never seen any smartphone earlier. It has also the first display with 21:9 cinematic aspect ratio. So, the overall Xperia 1 design is very unique and separate it from its competitors smartphones such as Samsung Galaxy S10 Plus, Apple Max and Google Pixel 3 XL. It is tall, thin but still has notch design from front which you may like or not it’s all about your own preferences. Technically, this 4K OLED HDR display supports 10 bit colors and ITU-R BT.2020 color space.

The tall design with large vertical display has certain advantage. The screen is big and vivid so you can see more content and get a new experience of watching videos and playing games. While browsing or reading, you don’t have to scroll down too much. Multitasking on such as large screen ratio will be a lot easier. Hopefully, we will get more contents on 21:9 aspect ratio formats in coming time. 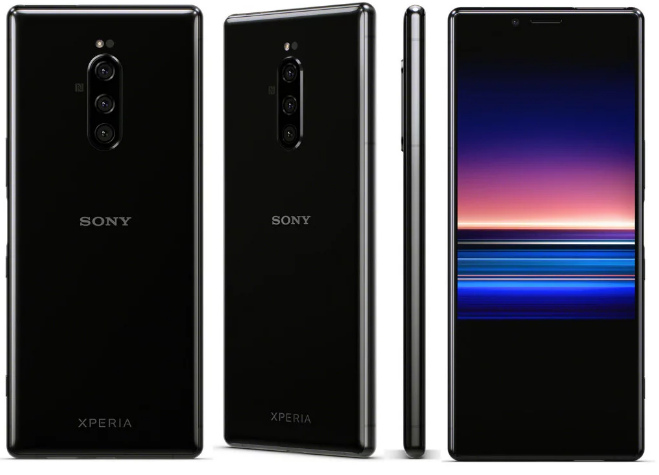 The major disadvantage of tall Sony Xperia 1 design is for users who have small hands. The one-hand use and navigation can be difficult for some users. Since it is a premium phone hence you will get options like one-hand mode but then it becomes a very ordinary flagship phone then. Its display size is 6.5 inches which have becomes an industry standard for flagships. But, every other flagships including Samsung, Huawei etc. have omitted notch design on the other hand; the large top portion in Xperia 1 screen is still covered with a notch that looks very big.

Talking about the Sony Xperia 1 specification, it is powered by the latest snapdragon 855 processor combined with 6 GB of RAM and 128 GB of internal storage. It doesn’t have finger-print sensor at the back nor under the display but rather it has a side mounted fingerprint.  It only has 3300 mAh of battery size which is a big down side considering that it has a 4K OLED screen that consumes a lot of power and we have to see how much screen on time it given in real world.

It has three cameras setup at the back. All the lenses are of 12 MP out of which one is 26mm wide angle with OIS, one is 52mm telephoto lens with OIS and one is a 16mm super-wide lens. The other features include RAW noise reduction, f/1.6 aperture, eye autofocus and 1.4 μm dual photo diode sensors. The 10FPS continuous burst mode is also supported.

The biggest advantage as well as disadvantage of Sony Xperia 1 is its 21:9 aspect ratio display. The content on 21:9 is very limited. The company has said that it is working with games manufacturers including the Asphalt and Fortnite to support the tall display. The video from YouTube or online video streaming platforms like Amazon Video and Netflix will have black bars on their videos. The details regarding Sony Xperia 1 price is not yet known. It will be available in multiple colors such as White, Grey, Purple and Black. It is an interesting device and it will be very exciting to see how it works in real life situations.