Tips to Fix Disney plus error code 83 with Easy Steps 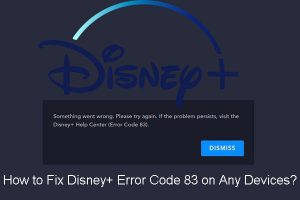 Disney plus is one of the leading and fast growing video streaming app owned by Walt Disney.

Disney plus was launched first in the United Kingdom, Ireland, France, Germany, Spain, Italy, Switzerland and Austria, starting in March. In a very short period of time, this app achieved its goal to reach the top among the other entertainment apps. Presently, Disney Plus is undergoing fastest growth in Indian Market and Latin America.

Now imagine you are enjoying watching Disney shows and movies and suddenly an unexpected error appeared on the screen spoiling all your mood, we all need to understand that at the end of the day it’s a technology and we can’t expect it to work without any errors, sometimes it happens because the service doesn’t work or due to any other reasons and most commonly Disney plus error code 83 is observed which completely blocks you from using Disney Plus .Now the question is what to do if you faces such kind of errors . Before solving the error we need to conclude its root so here we have discussed some common reasons due to which this error occurs:

Issues with Disney Plus Servers

Once in a blue moon it is quite possible that there must be an issue with the Disney servers or they are facing some malfunctions or under maintenance and the other possible reason for their server for being unresponsive is that many users are trying to access the service at the same instance which resulted the servers stop responding and error code 83 pop up.

Server overload is quite often to happen especially when a highly awaited show is out on the app.

The issue with your Internet connection

The most mutual problem is your internet connection, sometimes due to heavy rush on ISP (internet service provider), eventually you will receive this error message .

Another reason to occur this annoying error is device compatibility. Here we need to understand that not all the devices are compatible with Disney Plus. First of all what you need to do is just go for a compatibility check, here I would like to elaborate what compatibility exactly means there is a term DRM (digital rights management), what happens is when the device is unable to pass DRM check and it’s a required check that the app does before playing videos and when the device is unable to pass the DRM Eventually you end up with this annoying error that is Disney plus error code 83.

We have discussed earlier that there is a DRM check and if your device is verified with the DRM check then only it is considered as compatible.

It is quite understood that some users may be accessing it through a mobile device, some of them are using a smart TV , in such cases make sure that the app is up to date with the latest version one another thing you can do is you can delete and then reinstall solve your issue. Or simply go with the universal method just turn your device off and turn it on again , because time to time  your device needs a restart due to overloaded RAM  I used to do that and it works for me most of the time that’s why I added this here.

Here I would like to add for the Linux PC users it is quite obvious that you will face the error message due to DRM issues, Disney plus is compatible with Apple Safari, windows and Mac, including chrome, Firefox, Microsoft explorer and Edge, it’s quite obvious to get Disney plus error code 83 message if you are using other browser.

Whatever I had to resolve your Disney plus error code 83 issues I have listed them one by one, hopefully it will work out for you because you have invested lots of time here to get the solution.

How to fix Xbox not detecting external storage

How to fix Can’t Update World of Warcraft BLZBNTAGT00000840 Error