According to report, Xiaomi (Chinese Smartphone Maker) is going to release Mi 9T (M1903F10G) Smartphone in USA and rebranded as Poco F2 in India soon. We are seeing that ‘T’ variant of Mi series’ phone would be completely new thing while Xiaomi has previously released a handful of variants of their primary flagships such as Mi 8 Explorer Edition or Mi 9 SE, but ‘T’ naming is something different. It is interesting to see what will be attractive part on Xiaomi Mi 9T Smartphone. Let’s take have a look at Xiaomi Mi 9T (M1903F10G) in details. 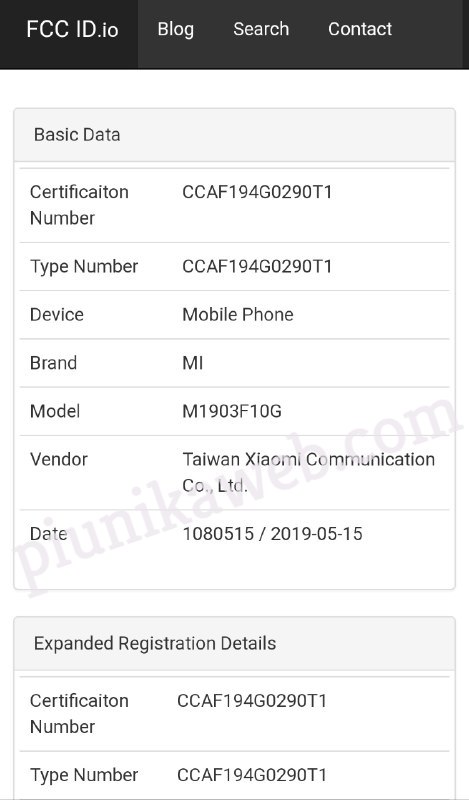 Judging from the character sequence, we can say that M1903F10G model number associated with Poco F2 is successor of Poco F1 Smartphone. Xiaomi Smartphone Company is planning to launch the phone in Europe or USA with NFC support. Apart from that, this upcoming phone will have inside the certification of list of Office Of The National Broadcasting and Telecommunication (NBTC). However, this model number can now been seen on United States Federal Communications Commission (FCC) verification site as well and states that the company is planning to release Mi 9T phone powered by Qualcomm Snapdragon 855 SoC (System-On-Chip) which will be re-branded in India as Pocophone F2.

When we talk about M1903F10G model number, it has some connections with the upcoming Redmi’s flagships. Since, this model number was surfaced at first in last month on EEC (Eurasian Economic Common). This site has noticed the sequence of character in previous model number of Poco F1 phone. It means that new model number is for upcoming phone of Xiaomi sub brand Pocophone i.e., Pocophone F2.

At the moment, it is confirmed that upcoming Xiaomi phone with model number M1903F10G will have Snapdragon 855 processor and NFC feature support. But what will be the name of that phone is Mi 9T which is now unified in every region. We all have to wait for it. We are researching on the matter very deeply and we will defiantly post an update, if it will come in future. For any suggestions or queries, please write on comment box given below.