What is Bubble Memory and its Advantages

The rotation of the bubbles corresponds to the equivalent of a read/write head for their reading or writing. The bubbles are read by bringing them to the material’s edge, where they may be read by a normal magnetic pickup, and then rewritten on the far side to keep the memory cycling. 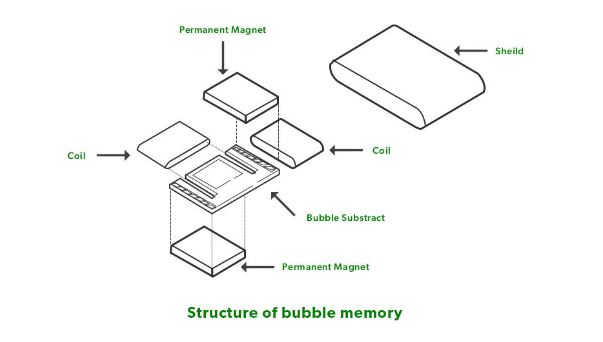 There are many advantages of Magnetic Bubble Memory and we have shortlisted some of its advantages, you can check below:

#. The Power Usage is less in bubble memory

#. It is more durable than disc memory since it has no moving parts.

#. The functional packing density is high in bubble memory.

#. Once of the most important features is its ruggedness, which made the military employ the technology even after it failed in the market. Hence many people concluded that it can be thought of as a “universal memory” that could be utilized for all kinds of storage. Bubble Memory is resistant to extreme temperatures, dust, humidity, and radiation while also being removable.

We all know that every coin has two sides if advantages are there then it is obvious that there will be some disadvantages well.

#. Bubble Memory was never widely employed since other non-volatile memory formats, such as EEPROM, are faster and less expensive.

#. It has limited application because it is to be used where these features prove to be useful.

#. This memory was widely used for some time in the 1970s. But due to massive loops required by a large bubble memory, accessing a bit requires cycling through a large number of other bits first leading to slow speed.

#. While Bubble Memory initially seemed to be a good choice, it didn’t withstand the test of time.

#. Non-Volatile RAM types like bubble memory don’t lose the info stored in them when their power supply is cut off.

#. It is a virtual memory that bubbles and stores information for long time.

That’s all about What is Bubble Memory. We hope that this blog was helpful for you and you liked it.